A word from our President, Serge Betsen about the involvement of Odile Prevot these past 10 years :

“The children of the SBA, all marked for life by MAMAN ODILE, join me and the whole team in thanking her from the bottom of their hearts!

I would like to thank Odile Prévot for the work accomplished as a member of the board and CEO of the Serge Betsen Academy (SBA), over the past 10 years.

Ever since her arrival back in 2012, the actions of Odile – now MAMAN ODILE for all our children – have been absolutely essential to the development of our association.

I commend her volume of work, her ambition, her pugnacity, her rigour, her commitment, her sense of organisation, her meticulous and efficient follow-up of files and her ability to find solutions, at all costs, so that our children benefit from the best possible support.

Odile has given a lot to the SBA, and we will miss her energy as well as her traditional and long trips to Cameroon since 2012 and to Mali since 2020.

MAMAN ODILE has of course greatly contributed to the implementation of the education-health-rugby triptych in all of our centres. She has also led innovative projects based on the fight for women’s empowerment and gender equality, such as the SBA Coop (our agricultural cooperative created in 2016, which now brings together 20 mothers from the centre of Bangangté who grow beans, corn and recently Artemisia to fight against malaria) and the SBA Pads project (production and distribution of washable sanitary towels contributing to the well-being of girls and the fight against school drop-out). She was also at the initiative of the opening of the SBA in the USA and in Mali, and enabled the centre of Mali to pay particular attention to girls. It is also thanks to her hard work that we have been able to collaborate with various partners and institutions, in particular the French Development Agency, thus enabling us to consolidate our projects and give them greater scope.

I will keep excellent memories of this collaboration with MAMAN ODILE.

On behalf of the children and of all our volunteers and partners, and myself, I wish you, Odile, a great continuation in your future projects. You will remain in the hearts of the children of the SBA, who are also your children.

A translation by Katy Birge-Wilson

Thank you Vivien Durand, chef of the Prince Noir in Lormont(33) and Jean Marie Gautier, chef at the Hôtel du Palais for this excellent diner and their kindness.

Thank you to Madame Laurence Fischer, sport Ambassador, for honoring us with her presence.

Thank you Bixente Lizarazu, Yannick Jauzion and Simon Shaw for their video.

Thank you to our artists Harry The Piano and Hervé Larrieu for these beautiful sculptures.

Thank you Lili Gérenton and Sylvie Dunatte, who immortalized this anniversary through their photos and videos. You can see the Gala Diner pictures and that of the Rugby Charity day on the dedicated links or check them out on our social medias.

Thank you to the charity’s loyal sponsors that were there and continue to support us.

Thank you to all the rugby teams, players and French Legends that were present on the 24th of July despite de 43°C!

Thank you Lionel Quenardel for the operation “recycled balls” with the sportive charity of the Collège Diderot of Massy, which helped raise over 33,000€ for the Serge Betsen Academy in 3 years.

Thank you to all the volunteers that helped make these two days happen, and everyone else that helped along the year.

Thank you to the charity’s bureau, Serge, Odile Prévot and Sébastien Lovy, who donate their free time to develop and follow the charity’s actions.

Thank you to our consultant Mailys Finel and Jenna Delmas Jalabert, who run the project communication and coordination for the charity.

Finally a huge THANK YOU to all of you for supporting us through your presence over the two days but also to all who coulant make it and still supported our cause.

A word from Serge

“I am slowly recovering from two wonderful days spent at the Pays Basque. What a beautiful celebration of our 15th anniversary between Biarritz and Bayonne ! Many thanks to all the volunteers, partners and rugby players for these two days that made the event of our anniversary unforgettable!
A special thanks to Olivier Otondo and the whole volunteering team that participated in creating these amazing memories. A true demonstration of solidarity which exemplifies the charity’s most profound value.
Thanks to your help we have raised 48800€! Milesker anitz !
I invite you to join us at the WateRugby by 6 stations Tournament from September 13th to September 15th in Toulouse.
Serge”

We have immortalized this 15th anniversary through a series of photos taken by Lili Gérenton, our official photographer, Sylvie Dunatte Stéph. V Photos and Théo Cheval !

📸 Pictures from the Gala diner  👔 : https://photos.app.goo.gl/wGLaBt5fr7YyxKm67

Thanks to our partnership with the Le Vestiaire Agency, we have created a new video to present our projects and actions in Cameroon.

You can check it out here: Présentation SBA 2019

At the Serge Betsen Academy we have held out our hand to the disadvantaged youth of Cameroon for 15 years now. We have welcomed over 5,000 children in our 5 educational centers. We cherish the many emotional and happy moments shared with them. In the event of our anniversary we would like to share some of these memories with you!

Strong memory#1 💚 #SBA15ans
💚❤💛
The Serge Betsen Academy is born on the 4th of March, 2004 and was first known as the Children of Biemassy in Yaoundé, it focused primarily on teaching rugby. 15 young players signed up at first.
💚❤💛

Strong Memory #2 ❤ #SBA15ans
💚❤💛
In 2004, the SBA helped the Rosy center in Yaoundé by offering an after school tutoring program.The center was created by Rosy, a retired nurse, in order to grant local children access to medical care.
💚❤💛 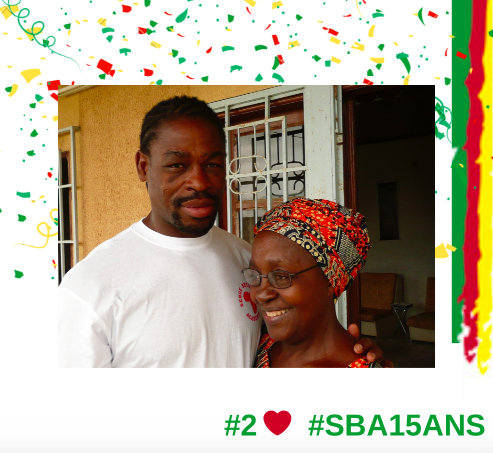 Strong Memory #3 💛 #SBA15ans
💚❤💛
In 2007 in Bangangté, we have created the Clear Water Center for 30 children.This is our most successful creation as of today as it now welcomes 110 children.It was directed by Dr Elisabeth for 10 years and it gathers all three pillars of the charity: after school tutoring, medical care and rugby training.
💚❤💛 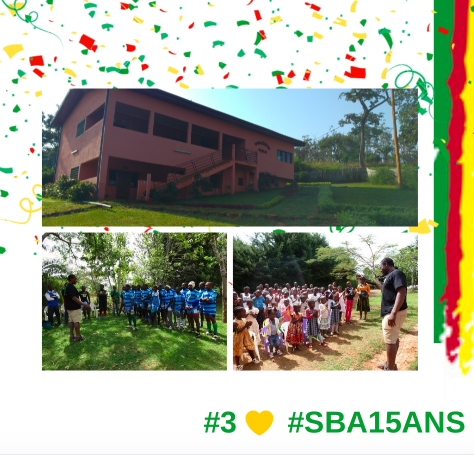 Strong Memory #4 💚 #SBA15ans
💚❤ 💛
In 2008, we created our first well at the Chefferie of Bangangté. It has granted access to drinkable water to the 33600 inhabitants of the city. Since then the SBA has built 4 other wells, 1 in Bafia and 3 others in Bangangté and 3 water towers.
💚❤ 💛 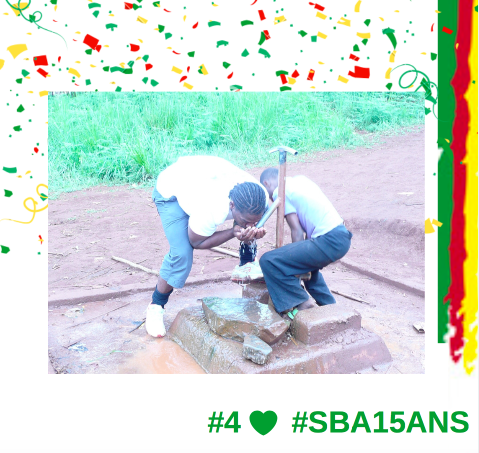 Strong Memory #5 ❤ #SBA15ans
💚❤ 💛
In 2008, the Children of Biemassy charity changed its name to the Serge Betsen Academy in order to symbolise an important turn of events. From this day on, the charity widened its mission from simply popularising rugby in Cameroon to using the sport as a vector of education, social integration, and healthcare access in urban and rural areas of the country in favor of disadvantaged children.
💚❤ 💛 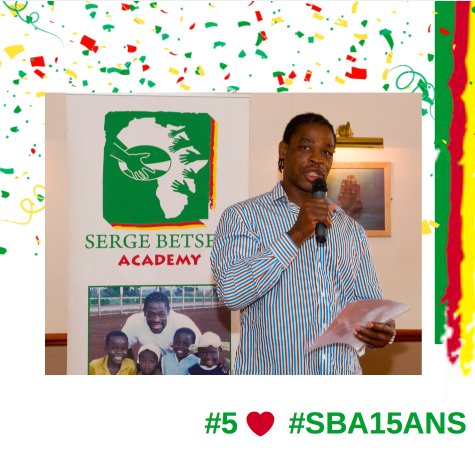 Strong memory #6 💛 #SBA15ans
💚 ❤️ 💛
In 2011, the Eden Garden center opened its doors thanks to our generous financial support. Every afternoon, 25 children from 4 to 12 enjoy a clean, calm and creative environment where they can open up and learn about community life. They happily take part in diverse educative, musical and sportive games.
💚❤ 💛 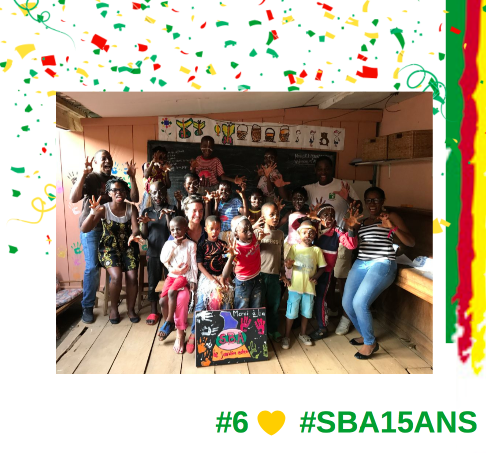 Strong memory #7 💚 #SBA15ans
💚 ❤️ 💛
A trip to Cameroon with Serge Betsen and an english delegation in November 2011 forever stuck with Odile Prevot and Sébastien Lovy. They then decided to commit for the wellbeing of the children of Cameroon and officially joined the charity’s board in march 2012. Since then, they hold the charity deep in their hearts and offer time, energy and experience to grant our children the best possible future.💚 ❤️ 💛 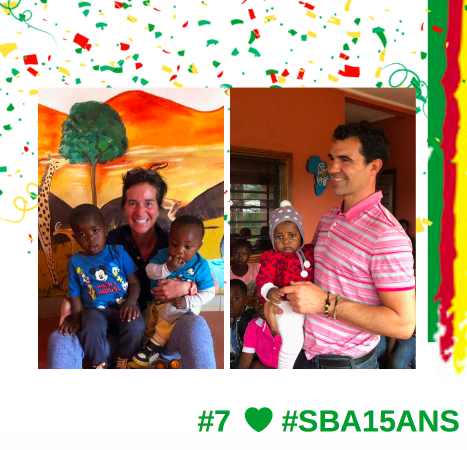 Strong memory #8 ❤️ #SBA15ans
💚❤️💛
The Zoétélé center intergrates the Serge Betsen Academy in 2013 after Serge Betsen met with Abaa, our rugby coordinator.Throughout the years, the children that used to come only for rugby trainings now also integrated the after school tutoring program since October 2018.
💚❤️💛 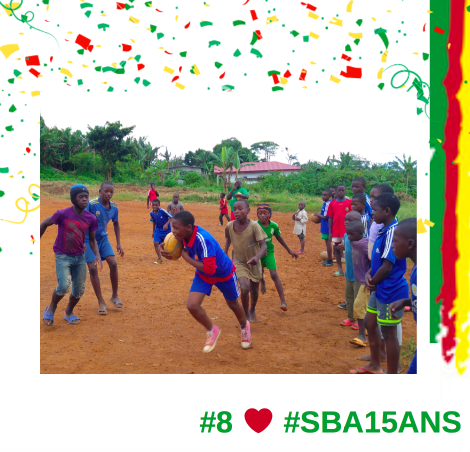 Strong Memory #9 💛 #SBA15ans
💚❤️💛
In 2014 the Serge Betsen Academy found this new field on which the youth of Ekounou will continue its rugby training, therefore granting the children with new perspectives. Today a real team made up of 20 boys and girls trains every Sunday at the Etourdi stadium of Yaoundé. These children are not only coached on the field but also in their studies for their future carriers! We are proud of their successes.
💚❤️💛

Strong Memory #10 💚 #SBA15ans
💚❤️💛
At the SBA, we are also very proud of the creation of solidary operations :
– The recycled balls operation launched by Lionel and the Diderot Middle School of Massy in 2016 which helped us raise nearly 30,000 euros in 3 years.
– The SBA Coop, an agricultural cooperative with the mothers in Bangangté created in 2017 that generated a corn and two bean harvests.
– The SBA Craft, an artists cooperative with overflowing creativity created in 2018 which gathered Philippe, our young artist specialized in bamboo and pearls, Clarisse, seamstress who notably has hand sewn bags for the children, Hérode, Djibril’s wife who stitched armbands for the national holiday and Christelle, a painter who created large paintings for the Eden Garden center.
💚❤️💛 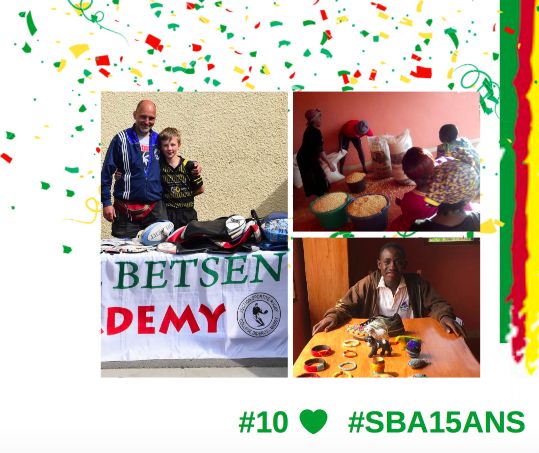 It was at the initiative of Quentin Lagallarde, President of the Cherbourg Hague Rugby Club that a charity tournament, open to all, was organised on Sunday 12th of May at the Cherbourg Manécierie stadium. Some of the city’s economic and political players came together in honour of our charity to step onto the rugby playing field and participate in a tournament in a warm and good-natured atmosphere. A few players, in the spirit of good humour, even put on their old rugby boots abandoned several years ago, for a good cause. 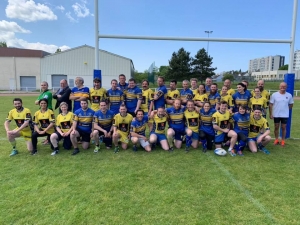 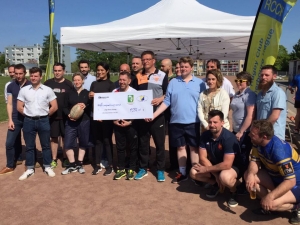 Men and women from different political backgrounds met up on the field, proving that rugby and charitable causes do go beyond the divisions and have a unifying effect, and this could only please Serge Betsen who advocates the human values of his sport.

At the end of this solidarity sports day, USD 1197 were raised to help our children in Cameroon.

A big thank you to the Cherbourg Hague Rugby Club for organising this beautiful day and to all the participants for their involvement and their generosity. This solidarity tournament celebrating rallying and equality fits perfectly with the values we wish to convey. Congratulations to everybody!

It seems that playing belote and jeu de tarot and raising funds for a good cause are more than compatible! Roger Nash, our dear volunteer proved it by organizing an amazing fundraising event at Wasps FC in Action on 3rd May 2019 which brought £4,410! It is a great amount of money to support our underprivileged children in Cameroon. 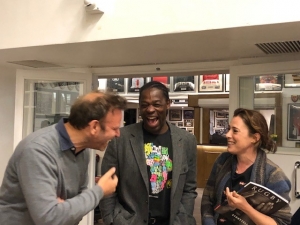 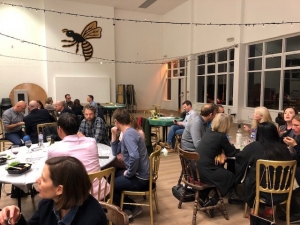 About 50 people gathered in Wasps FC to spend a nice evening together playing cards, enjoying a delicious duck confit, hearing great stories about our charity and donating money.

A huge thank you to our organizer Roger Nash, our hosts, the sponsors (Flint Wine, Europa Foods, Chanteroy, Papa Chef, Eric Merceron), the auction buyers and all the French cards games players for this fun evening together.