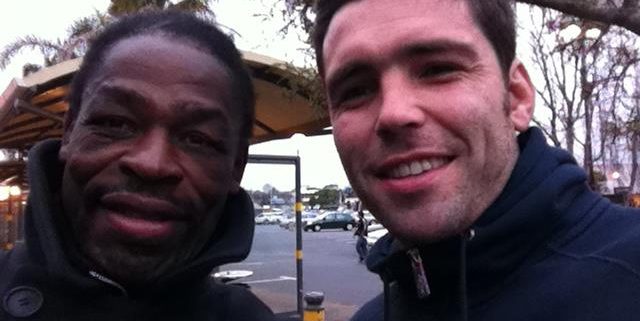 With 61 caps and more than 370 points with les Bleus, a lot of people describe him as one of the best scrum-half of all time. Dimitri Yachvili started with the PUC, then flew to England, in Gloucester and finally joined France and Biarritz Olympique in 2002. He won two Grand Slams in 2004 and 2010 with the international French team and played a World Cup final in 2011 against Ritchie McCaw’s All Blacks. The “Yach” is known for being a bit quiet, but when we mentioned Serge Betsen, he came alive and confided in us.

It was in Biarritz in 2002, when I joined Biarritz Olympique. It’s always impressive to meet a legend. I was young, I was barely 22 years old and he’d just been voted best player of the French championship.

This is going to be complicated to dissociate him from rugby because as a human being he was someone extremely kind who has a big heart, can be fun and helpful. He’s always been close to young people. When I arrived I was 21 years old and Serge was 5 or 6 years older than me and he was already in the middle of his career. He has always been close to young people in terms of transfer of knowledge. He has always done his best to enable young people to feel well and to progress. He welcomed me well and a few months later we were roommates, and it lasted years. All of this inevitably creates links.

Of course! It’s his way to return to his roots. It’s his way to give back to his native people everything he did during his career in France. He’s always had a humanitarian side. Helping others and the weakest has always been a priority. It’s not a big surprise if he created this association in 2004.

Really often rugby allows to get through complicated and hard situations. It’s also a way to become a more social person in life. The group cohesion that is created during trainings and games allows this. And I don’t talk about the confidence in themselves that these kids manage to get, and all of this with joy and pleasure! Because sport and rugby before everything must stay a pleasure.

Long life to the Serge Betsen Academy and bravo again for everything you realize for these young people and sport in general.