Serge Betsen Academy (SBA) is proud of the women from rural communities at its SBACoop who have grown their income and now achieve improved welfare for their families by covering their school fees and medical expenses, without needing contributions from their husbands. Financial independence for women is on the rise!

Our farming cooperative has now been running for three years, with mothers from the centre in Bangangté. As they do not own the land they work and have not had the opportunity to go to school, women at the SBA Coop are vulnerable. They can’t get loans, they have no security of tenure for the land where they run their farming activity; goods they can lose at any time. To tackle this, we have launched a new project to support the mothers of children at our centre, to support them in reaching financial independence.

Every year in April, SBA provides seeds for bean and corn at cost. Each woman commits to paying back the seeds by the end of January the following year, subject to her ability to work the plot of land she has access to and which has been often allocated by their husbands. Harvests take place twice a year for beans and once for corn. 25% of the yield goes to SBA to feed children at the centre and 75% is for the mothers to sell at the town’s markets. They participate in the local economy and they generate their own revenues. This makes them less vulnerable to financial hardship. 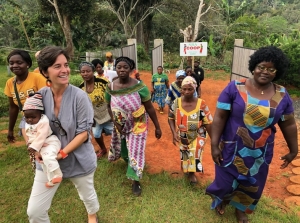 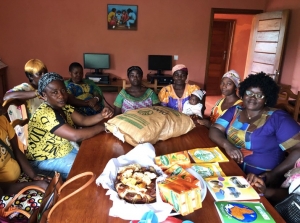 Thanks to the Coop, mothers of SBA children become more responsible and collectively engaged. There is healthy competition amongst them, which helps bring tangible results.
– The women have repaid all the costs either in the same year or the following year. SBA’s investment was €820 in the first year (2017), €1,120 in 2018 and €1,050 in 2019. In 2020, they have asked for €2,165 in advances.
– The 75% share of harvests they retain has allowed the SBAs mums to become financially independent from the first year. They have not needed to ask for financial help from their husbands or families since then. They are able to cover school fees, medical expenses, investments to grow their business including renting a bigger plot of land.
– This project has sustained over 2,000 meals for SBA children in 2018 and 2019.
– Given these successes, we plan to continue with the project and to invest at least €1,500 each year, to provide even more meals in our centres and support even more women towards financial independence.

The project started in 2017 with 11 mothers. There are now 17 who are members of the Coop. We congratulate and encourage them!

Cameroon: The infirmary of the Eau Claire Center has been stocked up on medicines...

Our success stories: Christelle, volunteer at the SBA Centre of Jardin Eden
Scroll to top