On April 18th Serge Betsen, Lionel Quenardel a SBA volunteer who is a professor of EPS at Diderot Massy, and Jenna our SBA project leader arrived in Cameroon.  Serge and Lionel stayed one week, while Jenna stayed for over a month to assist the Cameroon SBA directors.

Upon our arrival the centre L’eau Claire, we were greeted by the Bangangté rugby team, Djibril who is the centre’s director, and Elisabeth the SBA’s president in Cameroon.

We were pleasantly surprised as we were greeted with the local Haka in Medumba, the local language, which was performed by the rugby players!  The originality of this Haka had its charm, but also instilled some fear from the performers!

A media team from Canal+ was also present to tape an episode for the emission Talents of Africa on the actions of the SBA in Bangangté. This has allowed us to immortalize this visit.

With Lionel’s help we started the rugby activities.  The program of the day was rugby training.  We started with the importance of training and the safety of the player (placement of the back and attitude- report far/high to increase security). Earlier we had cleaned the playing area with the players (strewn with rocks and other items).  With this done we were able to work the rise of the 1st defensive curtain. Then we worked on tackling.

At the end of this training session, we came back to participate in a traditional welcoming ceremony and to meet the other students from the centre L’eau Claire.

We then returned to the playing field around 4pm to work on supporting whoever is holding the ball (“last passer, first support”) with the trajectory orientation of the course, then in the axis and deep in the laterality (situation 3c.2+1).

This work in 2 sub-groups of a dozen players each enabled Serge to get involved and assist the players.

Along with this training another session had been started with the smaller children who had come to watch the rugby team train.  They did general movement exercises in the form of ‘touch – pass – challenge’ (Culture Rugby Movement Testimonies http://www.fndr.fr/) with taking account of the general principles put in place earlier that day.  Then the game at the foot, general movement (actual game), with launch of game at the foot in the 3rd defensive curtain – taken into account the report time-space for the use of the ball and work on the trajectories of travel was all covered.

By 6:30pm a storm had come in and the sun had gone down so the days workout was finished.  We returned to the centre to review what we had done.  Lionel gave explanations towards their objectives to make sure they understood.  So we were able to impart some more technical theory even if the principles of action needed to be more thoroughly trained.

The day ended by a question and answer period, followed by handing out more training gear and taking pictures with “Uncle Serge”.  I am delighted in what I saw and really confident for their future.

On our second day we left Bangangté and headed to Bafia to meet the children and their families.  Our centre director, Jean-Cyrille, organized a friendly visit complete with a welcoming song.

Not everyone could join us as it was a Monday.  Some children were still in school, others in the middle of exams, and many parents were at work.  Once again the testimony of the parents and children touched me deeply as they simply reflect the objectives of the SBA: a place that is their home to find everything they are missing in their daily lives.

Bertrand, a young orphan who lives at the centre shared, “I made a 10 average the first quarter, but that is inconceivable, I do not have the right to have 10 average, because of what I have here, all that I receive at the centre, I must progress.”

Justin, another orphan living at the centre, “Thank you Uncle Serge, thank you the members of the SBA, thank you Father (Jean-Cyrille), because this is paradise.”

Jean-Cyrille had prepared a DVD presentation for us which he commentated about the centre.  We discovered their Wednesday afternoon sport session around football.  Naturally along with this rugby is now being introduced which will allow them more exercise around discovering the oval ball.

Our objective was also to visit the newly finished expansion and to symbolically inaugurate the main room as the Charlie room, in honour of a young man who tragically died in a bicycle accident at the age of 20.  To honour his memory, and his love of Cameroon and the values of rugby, his family had given a donation in his honour to the SBA.

It was then decided to place a plaque with “Charlie” engraved in the big classroom.  This decision was put up to a vote where there was a unanimous decision by the children, the instructors, and their parents.  I wanted everyone to be part of this decision so that the children feel involved with their home and learn to take care of it. To avoid conflicts and allow children to have easy access to safe drinking water, without having to carry huge cans several miles every day, a pump was added and the well repaired on the grounds of the centre.

After this visit we then headed back to the capital with magnificent memories and with beautiful projects to improve the life at the centre.

The next day we left for Zoétélé, in the south of Cameroon, having Mr. Serge Enguene, the treasurer and representative of the Cameroon Federation of Rugby to come see our program first hand.  Upon arrival to the club we found Abaa, the director of the centre in Zoétélé and Jean-Marc the young assistant instructor. As previously planned the space had been painted.  We then met the club’s children.  During our time together we held a question and answer period about the game of rugby.  Through this exchange we were able to assess their level of rugby knowledge. It was clear that their practical application was stronger than their knowledge of analysis and the roles of each player…

Then thanks to Abaa we were introduced to the sub-prefect who offered us dinner on the evening of our arrival. We were able to discuss introducing rugby into the local high schools.

The next day we spent time exploring the river Ntem and that afternoon visited the Nkoumadjap school where Lionel presented the students in 6ème with a selection of rugby diagrams made by his students in 6ème at the Diderot de Massy school.  The latter diagrammed the four fundamental rules called the central core of regulation: 1- the mark, 2- the off game, 3- player rights, and 4- tackling.

This allowed many, who did not know the sport, to have a nice introduction to rugby.  To compliment the theoretical part, we stayed and practiced on the field.  Following this nice session we went back to the centre at Zoétélé for a meeting that Abaa had organized with is players.

We were able to do a warm up with the 30 children who were present, then some games, and finished off with little matches with two groups based off of skill and of course age.  Afterwards we shared a pot of friendship and handed out equipment that we had brought for the players, thanks to our sponsors.

Each of these get togethers enable me to see Abaa’s operation, but also allowed me to remind the players and instructors to maintain their motivation as the practice of rugby is foremost passion and if there is no regularity we cannot support them.  In conclusion Abaa has a passion for this sport and he has achieved much with these children.

Unfortunately, due to our tight schedule, we were unable to visit the children in Etoudi during their training.  Following the move and our termination of support at the centre Ekounou the rugby program at Etoudi is slowly ramping back up.  We were able to speak with several children to encourage the to train and invite their friends to play.  Jenna was able to observe them more during her time there in May.

On Friday, we went to see the children at the centre Jardin Eden in Yaoundé.  We saw the children in the presence of our director Nadège who directs their activities, Christelle, our SBA artist, who organized painting and craft lessons, and the centre’s music teacher who comes on Fridays.

They presented us with a musical welcome with all they had learned throughout the year, which was most appreciated by all present.  Accompanying us that day was a television crew from Vision 4, who filmed these activities in order to broadcast it.

Nadège then updated us on the centre’s activities.   Afterwards we headed towards the pool at the Club France, where our centre is located, to play some impromptu rugby.  The girls were quite a success story as of the 15 children present that day there was only 1 boy.

The outcome of this voyage was very positive! Rugby is now present in all 5 centres for beginners to advanced players.  The projects launched by Odile a few months earlier during her trip or by Elisabeth who is onsite are in the final stages.  We still wish to develop more local partnerships in Cameroon.  Our newest goal is to involve the parent in the activities of our centres so they are fully aware of how their children are benefiting for their centre. 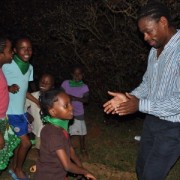 Cameroon: Jardin Eden or the birth of a centre in Yaounde

Partnership: Our Rugby project for Kids has received a “Sport & Development” grant! 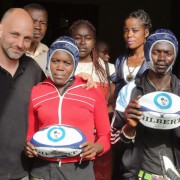 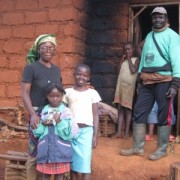 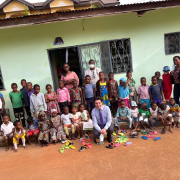