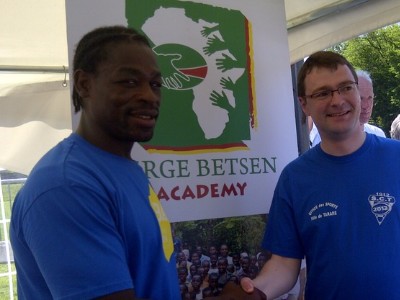 On Saturday 26th, was held the second date of the SB Tour in Tarare (next to Lyon). This event also was the opportunity to celebrate the 100 years of the Sporting Club of Tarare (SCT).

This day, full of emotions, was organised in different parties: during the morning defence workshops were held as well as a parade composed by current and former players of the club. In the afternoon a giant scrum with hundreds people overran the stadium. A dancing party took place in the evening to end this nice celebration. Not to mention the wonderful bandas that accompanied us all along the festival.

The charity and its chairman Serge Betsen thank the organizers of this great day, which also helped the SBA to raise funds.