Four years ago, our CEO, Odile Prevot offered to some mothers of the children we help, the opportunity to create a farming cooperative in Bangangté. She has been closely following their progress, meeting them virtually every month. So far, this cooperative has enabled 17 women to grow their income and has had a positive impact on the lives of their families and the ones of our children. Odile and all the Serge Betsen Academy are very proud of their achievements and their ambitions. She decided to write the following notes to honour these brave women and share with you their success story:

“How creating financial independence for women leads to sustainability?

Back in 2016 while visiting one of our centers in Cameroon, I was sitting in the classroom with a few of the mothers of the children we help. We have known each other for a number of years now and they are always in demand for stories coming from Europe and America.

Whilst seating with one of their babies on my lap, health and education were our main topics of discussion. They explained that, although the duty of the man is to provide a house and cover the main household’s costs, it is up to the mothers to take care of the children and all the costs associated with raising them. However unlike men, their access to financial resources is very limited. One of the mothers, Clotilde, expressed her concern that her working in the fields was not enough to provide for her children’ school fees and other expenses and asked for help as she knew that with the right resources, she could grow more crops and make ends meet.

Other mothers joined in and the discussion became very animated. Realizing it was a common problem, which could become an opportunity if they joined forces, I offered them to consider a cooperative framework, where the mothers would take responsibility over the operations and the management of COOP. The role of the Serge Betsen Academy (SBA) would be to provide oversight and the seed funding at the beginning of the year, and in return the COOP would reimburse the funding 12 months later and share a portion of the crops during the year, in order to help feed the children of the SBA center.

And just like that, the SBA COOP was created, the lawyer in me wanted to create a sustainable structure so I drafted the COOP bylaws following OHADA principles, with 11 mothers as founders with the SBA providing corn and bean seeds funding, producing 450kg of corn and 342kg of beans at year-end.

We are now four years later, the COOP has tripled its crop production, provided enough extra income for the mothers to finally afford to pay all their kids expenses, and in some cases allowing some of the mothers to start new businesses, becoming increasingly financially independent.

This incredible success story has also been very positive for the SBA, which was not only always repaid on time by the COOP, but it helped the center in becoming more sustainable as the COOP now provides enough food to feed more than 130 kids of the SBA center throughout the year, totaling nearly 4000 meals.

Today this micro-financing scheme, offered to the moms, helps them to deal with emergencies, make critical purchases that they could not otherwise afford and put food on the table in times of scarcity, even start new business ventures! But more than that, they are all empowered to speak out more, they assume leadership roles. When I meet them virtually every month we make sure that SBA COOP is an opportunity to meet formally with all the other moms to discuss problems and develop joint actions.

So proud of our rural women. They are working as hard, or more, as the men next to them with less income and as member of civil society we must use our convening power to build capacity and resilience when assisting women in need.” 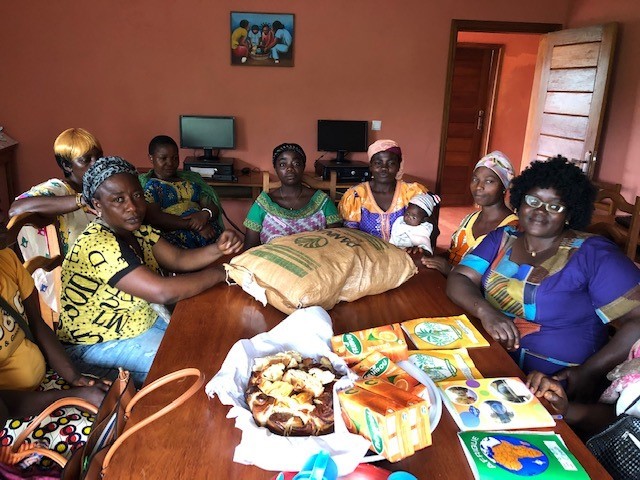