On 5 July, Mrs. Marthe Félicité Zintchem, Mayor of the municipality of Bafia had a meeting with our CEO, Odile Prévot, in her offices. Both are committed to supporting young people. Thank you, Madam Mayor, for having met up with Odile Prevot and for having been attentive to the actions of the Serge Betsen Academy (SBA).

“First lady Mayor of Bafia, lawyer and woman of action, the children of the SBA centre in Bafia will be delighted with your visit!”

We would like to thank the Bafia Town Hall team for having published the following text following Odile’s visit:

“A distinguished guest with the Mayor.

The Mayor of the municipality of #Bafia, Marthe Félicité Zintchem in Bodio, has just had a one to one meeting with the CEO of the Serge Betsen Academy association, who paid her a courtesy visit. In this context, Mrs. Odile Prévot explained to her lawyer colleague the purpose of her visit to the town hall today. In fact, Mrs. Odile Prévot came to present to her learned colleague the Abraham and Sarah Centre of the Serge Betsen Academy, located next to the “Lycée Classique et Moderne de Bafia”. This centre was created in 2004 and takes care of young people aged from 11 to 20 years old. This year, more young girls than boys are to benefit from the centre, placed under the local supervision of Mister Jean Cyrille Monthe. The centre provides academic support, medical aid through the infirmary which the students attend on Saturdays and sporting support through several sporting activities including rugby, a discipline in which the promoter, Serge Betsen, played at the highest level until becoming world champion. The centre currently has 65 children and 150 are knocking on its doors. Mrs. Odile Prévot plans to implement the project of producing washable sanitary napkins for the benefit of the young girls of this centre, most of whom are destitute, on condition that this project produces results in Bangante where it is currently under experiment. If this project gets off to a good start, the idea is that 75% of the profits go to the girls for their wheat 75%, and 25% go to the centre for its operating costs.

The Mayor expressed her full approval of this project which contributes to the development of local youth while giving a real chance to the children of the underprivileged. This project captures her attention even more so, as above all it integrates the young people who are the fundamental axis of Marthe Félicité Zintchem’s actions in Bodio, in her capacity as first magistrate of the city of #Bafia. She will then have the opportunity to visit, with eagerness, the buildings of this centre. And it was on a note of mutual appreciation that the two robed women parted ways, not without wishing each other resounding success in the conduct of their respective duties. ”

New computers, donated by the ATF Group, have arrived in Cameroon. Odile, our CEO, organised for them to travel with her from France at the beginning of July and ensures that they are properly installed during her tour of the centres.

Thanks to this great donation from the ATF Group, we were able to replace the old computers with new ones in the computer rooms of the Bafia and Eau Claire centres in Bangangté. Since 2017, we have been fortunate to count on the support of the ATF Group, a specialist in the lifecycle management of professional IT and mobile telephony equipment. In addition to financial donations, especially through repayment operations following the purchase of computer equipment, the ATF Group has made regular computer donations to equip the classrooms of the association’s various centres and allow children to learn all about computing.

In the Bafia centre, the two old computers below have been replaced by laptops. Max, IT manager at Bafia took care of their installation and very quickly the young people wanted to try these wonderful tools under Odile’s watchful eye. 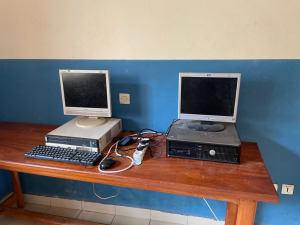 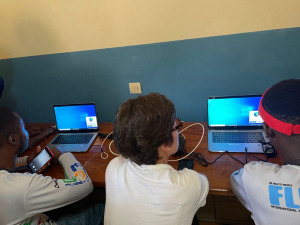 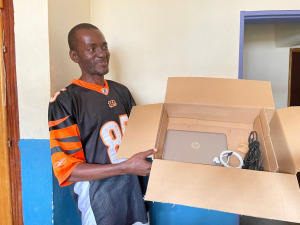 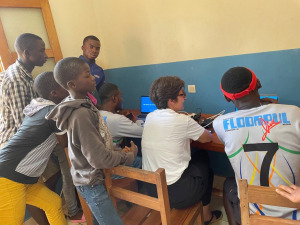 The same operation occurred in the computer room of the Eau Claire centre: the new computers have also been installed and are making people happy. 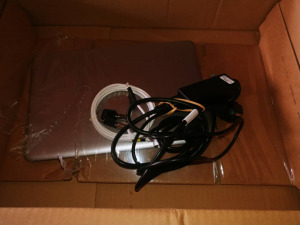 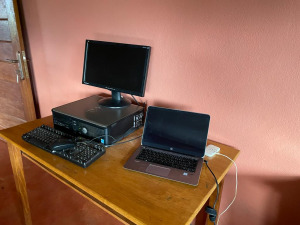 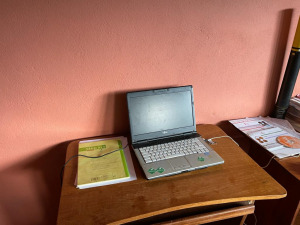 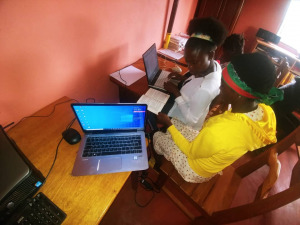 A huge thank you to the entire ATF Group team for their loyal support to the young people of the Serge Betsen Academy! Our computing lessons are always very popular in our centres as you can see below.