What a great tournament! Saturday, October the 27th was indeed a great day for the rugby players of the Serge Betsen Academy.  The teams of Zoétélé, Bangangté and Etoudi lined up to meet at Zoétélé to scrimmage at our second inter-center tournament.

Respect to Abaa: Head of the Zoétélé SBA center, rugby coordinator for SBA, and national coordinator of the “Get Into Rugby” program of World Rugby. Abaa organized this event and he was helped and supported by our faithful volunteers: Laurent, Lionel, Francis and Cecile. If you judge an event by the passion and enthusiasm of the players during the tournament, then we can definitely conclude that this was a great success. 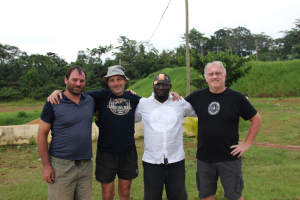 The sheer diligence of the teams involved formed the solid foundations for this well organized event. Precision could be seen right down to the position of every pole placed to mark the pitches. The distances were perfectly measured, and a high calibre of referee was present outlining the important details covering safety, practicality and conviviality. The briefing took place the day before upon arrival at the hotel. 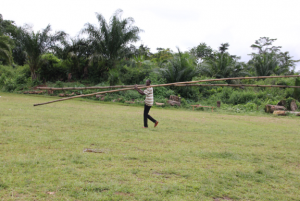 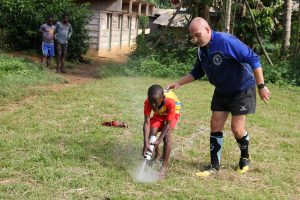 In his address to the teams, Abaa reminded us of the important values ​​of rugby and celebrated the festive spirit and origins of this special event. Abaa was followed by Lionel who outlined what the SBA stands for, pointing to the privileges bestowed upon the players, picked to participate on the pitches. They were also reminded of the prerequisite for perfect behavior on and off the pitch, and of their responsibility to convey the values ​​of the SBA from elders to youngers. It also fell to Lionel to outline the rules of the tournament, bestowing well merited respect upon the referees; the importance of safety for all with a stark reminder that rugby can be a dangerous game if not carefully controlled. There were trophies proudly on display, along with the shields that embodied the heritage, culture, pride and tradition all warmly expressed in Lionel’s address. 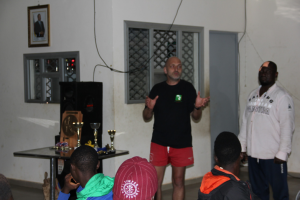 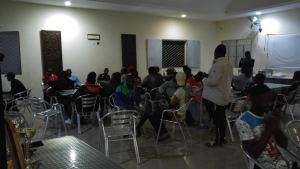 The next day – the fully briefed players bursting with pride walked out onto the pitch.

As an overture, about 25 of the youngest players aged between 8 and 14 years old provided an awesome display of athletic skills, ranging from running to ball-passing… 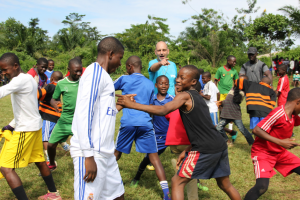 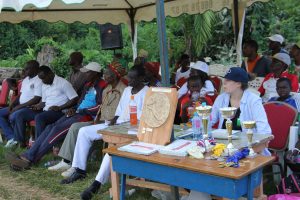 Then the tournament began, and six group matches were played out. The competition was tough and the matches were tight. These players knew each other well – making it such a special community event. There were fifty enthralled spectators including officials and dignitaries who followed the games earnestly which further heightened the pride of the players. 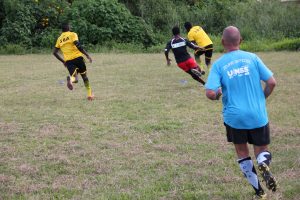 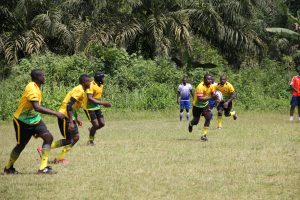 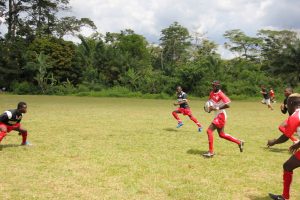 The Etoudi and Zoétélé first teams found themselves in the final and after an awesome game, Etoudi emerged victorious. We could see the joy bursting behind match-fatigued eyes, victory is never easy. 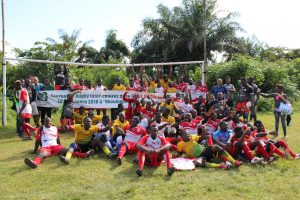 A photo shoot was followed by a long-awaited awards ceremony. Some noticeable individual performances were called out and then team prizes from 6th to 4th place were presented. Medals and certificates were given to 3rd and 2nd place teams. And a trophy for the best scorer was awarded to Ebo’o Epima Simon Stephan from the Zoétélé first team to congratulate him especially.

Finally, the Head of Sector and a Village Chief presented the winning trophy to the jubilant Etoudi team handing them the magnificent shield of SBA and the Winners Trophy. 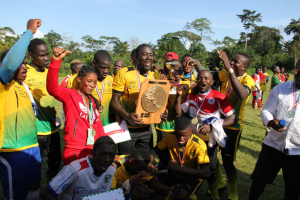 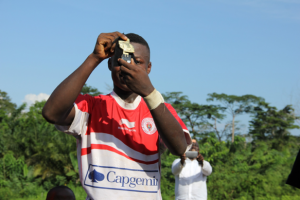 A closing ceremony ended this day in style accompanied by a welcomed buffet. It was a wonderful event. And we cannot wait to meet you in 2020 for the 3rd edition of this wonderful tournament! 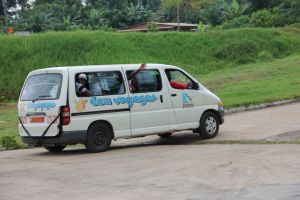 A big thank you to all the players for embodying the beautiful spirit of rugby, to Abaa for the organization of the tournament, to Lionel Quenardel of Diderot College Massy, ​​Francis Forestier and Laurent for the organization and coaching of the players. Also to Rugby Club Massy Essonne for the supply of pharmacy services for the tournament and to Alain Henin for dedicating the shield. Cécile deserves a mention for her precious help and our gratitude goes out to BBC Sport Africa and Vox Africa for the coverage of the event.

Most of all we send a big thank you to our partner La Financière Arbevel without whom this 2nd edition would not have been possible.

Success story: Brice has learned how to behave in a group thanks to rugby!
Scroll to top