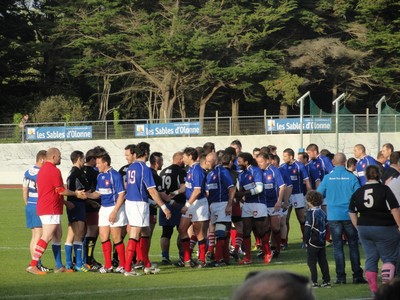 At the initiative of the Lions Club, the Zonta Club, Kiwanis Club, the Rotary Club and the Rugby Club from Les Sables d’Olonne a gala game was organized on May 9th to benefit the Serge Betsen Academy and the “Chœurs pour grandir”.

The Rudeliere Stadium was full on this day for sick and disadvantaged children.
Following the female match, the Vendéenne team went up against the France Classic, composed of former players from the Equipe de France. The kick-off was done by 6 year old Maxime who suffers from Sylver-Russel Syndrome. He was aided by Serge Betsen who whispered some encouraging words. That night Maxime, who has been in treatment for only 3 months, declared to his parents, “Now I am big and can give myself the shot!” The final score was 17 to 25 for the French Classics and 2900€ was raised for the SBA and this little boy filled with courage.
Thank you to the organizers and all the participants! Especially bravo to Maxime!!!
https://www.sergebetsenacademy.org/wp-content/uploads/2015/06/IMG_1202.jpg 300 400 SBA webmaster https://www.sergebetsenacademy.org/wp-content/uploads/2015/10/SBA-logo.png SBA webmaster2015-06-24 00:00:002016-04-28 17:22:14Event : Charity game at Les Sables d’Olonne

Event : Tournament of the 6 Stations in the Alps
Scroll to top