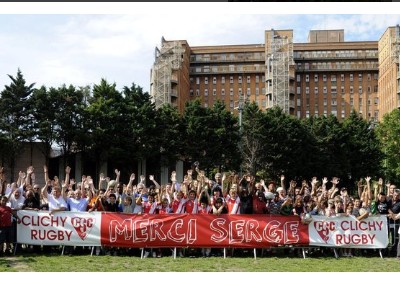 The third date of the Serge Betsen Tour took place on 2 June  in Clichy.

During this family day, various rugby workshops were organised for the children with the participation of Serge Betsen. A “thank you” banner made by the children welcomed  Serge when he arrived.

As the Serge Betsen Academy has just opened a branch in Clichy, the charity was even more present with a stand held by volunteers presenting our action and welcoming our generous donors.

Following the arrival of Cameroonian women, we saw our Chairman joining in the dancing (a video is published on Facebook at http://www.facebook.com/sergebetsenacademy). Photos were taken with Serge Betsen, the children of Clichy, and a sponsor – who recently gave the opportunity to a group of children from Clichy and Val de Marne (two Parisian suburbs and new branches of the charity) to go to Serge Betsen’s testimonial in Biarritz on 6 June.

The day carried on with an entertaining dinner while watching the final top 14 rugby game and ended with an evening dance.

The Serge Betsen Academy’s team and the  Chairman would like to thank the organisers of this great event, as well as all the people who attended.