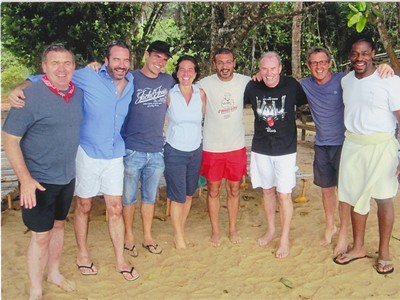 For the ten years anniversary of the SBA, we propose to revisit the highlights of the past with the testimonies of those who have sustained the organization throughout its existence.

John O’Connell won his trip with Serge in the centers of the SBA. He tells us his journey.

Putting your hand up at an auction at a Rugby dinner, fuelled with bonhomie and perhaps some alcohol too is always a risky action, as I know to my cost – how many more rugby shirts can I hang up on my walls at home for goodness sake!

It might have been the Gallic flavour of the night adding French chic to the atmosphere, but anyway one simple hand gesture parachuted me and ‘compounding the felony’ my brother Alan; my Irish cousin Charlie and my ex-fellow London Wasps director Graham Wynde too, a few months later onto the Serge Betsen road trip to the charming world of Cameroon to witness at first hand his mission to tranform young people’s lives there through the ethos of   Rugby – the Serge Betsen Academy as we all know it.

Cameroon is a well ordered law abiding society but regrettably still showed the chronic disparity in the infrastruacture for health, education, transportation, power, water and other everyday matters we take for granted in the ‘West’.

Yaounde the capital is the more recognisable face to Western eyes of Cameroon, but even there , one was , on arrival at the chaotic Airport, immediately aware of how fragile are say the road, power,health and water systems. Serge having obviously ignored all the health advice his team had given us ‘African virgins’ beforehand was unceremoniously jabbed with a needle at the airport which appeared to have been used , without pausing, on many other people beforehand. Serge being Serge seemed not to notice one arm had been assaulted by hardly slowing down his walking pace duaring the injection, cutting through the sea of enthusisatic porters like a latterday Moses.

The short journey to our hotel took almost as long as the flight, but niavite undimmed we emabrked the following day upcountry to witness the SBA in action in schools and out on the Rugby Pitch.

My brother Alan clearly brought up in the same school as Serge of ignoring all pretrip guidelines proceeded to act like Lord Bountiful at the first school we visited, by handing out Queens Park Rangers football shirts – immediately converted into an Awards ceremony by the enterprising head teacher there, little knowing that most soccer followers in England would regard QPR shirts as best used when washing their cars! (Sorry Alan.) Serge took this double yellow card infringment – handing out gifts and usurping a Rugby tour with Football shirts – graciously, although on reflection my brother’s subsequent demise with a severe dose of Yaounde Stomach might have been his revenge after all!

The enthusiasm of the young people was palpable from one visit to another and our next stop to see Serge in action coaching youngsters on a baked mud pitch, many not having footwear, many not having shirts and most not wearing both was one of the experiences of the tour. Once again my brother deemed it appropriate to apply his football background, this time his refereeing skills to rugby as Serge’s willing assistant. Most of us were very taken by the wide-eyed innoncence of the youngsters which continued to be a theme wherever we went – to other schools, rugby camps and so on. Serge berating one bold youngster for asking for a rugby shirt had echos of Oliver Twist asking for more food! What temerity to expect a shirt to wear!

Serge’s ‘mammy’ was a delightful host for a couple of days, although our experience in staying at the ‘Insect House’  for a night was one to rank alongside trying to go to toilet outside of an igloo when it is minus 30 – both better looked back on!

Odile who by now had emerged as the strong woman (well the only woman actually) of the trip had in her Margaret Thatcher style commandeered some hotel rooms for us after a thorough military style inspection beforehand. Thinking the rooms needed airing, which they did, and not appreciating insects liked warm well lit accessible bedrooms, which they did, she opened up the doors to all of the rooms and put the lights on for at least two hours before we arrived. With every specimen of insect life in Cameroon snuggily settled in each of our bedrooms, the touring party did the only sensible thing in the circumsatnces – which was to empty the bar of alcohol, whilst wondering how we could tame the single Geeko to eat its own bodyweight of insects, whilst hopping from one room to the other. As you can imagine this took several hours to reach an inconclusion but distracted us from the night ahead. The fact that the receptionist slept on the bar table revealed everything, on reflection.

Visiting the King of the village, listening to his woes about being press ganged into the role surrounded by dependent women (stop this is all too getting too close to home!) preventing him from jumping on our coach to get to the West, whilst discreetly  trying to water his mudhut floor with his urine smelling bamboo wine, was memorable, as was by complete contrast, the wonderful lunch at the French Embassy. (Next time we should stay there!)

Seeing the school which the children had helped build, with no books; chairs ; no windows; a blackboard literally painted black by them and no toilet facilities was another humbling experience for us softie westerners. (I am involved with a Young Person’s charity in Ireland too and I  wished some of them could have witnessed such lack of basics to make them appreciate their relative good fortune.)

Returning to Yaounde along ‘suicide highway’ with holes in the road the size of Andorra, at night with timber trucks speeding in the opposite direction with no lights on , driven by redbull fuelled manical drivers made the M25 in the UK seem very sedate indeed!

in between time we had a calm couple of nights at a charming seaside town lapping up the tranquillity whilst having a BBQ on the beach – absent my brother who had gone down with ‘Serge’s Curse’ and cousin Charlie limping from taking a fall with the excuse that the water being undrinkable he would have alcohol instead!

Throughout the trip Olivier, Odile’s husband, smiled benignly on her taking over more of the tour which the rest of us also very happliy accepted too, as she clearly had more organisational skills (especially when it came to insect husbandry) than the rest of us, as subsequent developments in her role with the SBA has proved.

It all seems such a long time ago now, although it was only three years ago, but the memories of this once in a lifetime trip are still very vivid. I know my companions feel the same way too and I do hope our participation has helped a little to sustain the wonderful work the SBA is doing in Cameroon – so keep it up Serge, Odile and the rest of the team. Thanks for the memories!